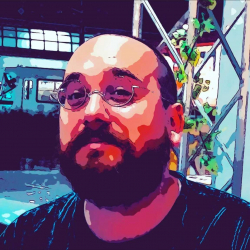 Seth Christmus
Seth is a writer for SDew HQ. As a kid, one of Seth’s favorite games was Harvest Moon 64. He’s always enjoyed playing indie games, too, so this led to a natural love of Stardew Valley and how it built upon games like Harvest Moon. He has written guides, reviews, and news articles for a number of gaming sites in the past.

Stardew Valley is a bright, vibrant indie video game filled with different things to do. You can raise animals, go fishing, run around town meeting people, or simply tend to the numerous crops you can grow on your farm. Your life in Stardew Valley is fairly self-contained, without any real need to travel outside of it, except for the odd trip to Ginger Island or Calico Desert.

Obviously, a world exists outside of the valley, as we can see in the opening cutscene where the character you play decides to leave his corporate job for the peace and quiet of rural life. But we don’t learn much about what’s going on out there if anything at all until Kent arrives in Pelican Town.

Kent is a resident of Pelican Town who, because he was off fighting in a war, doesn’t appear until your second year. What exactly he did while in the army doesn’t come up until you get to know Kent a little bit better through gifting and Heart Events. His inclusion in Stardew Valley raises more questions than it answers about Kent and the larger setting of the game’s world outside of our peaceful little farm.

If you want to learn more about this somewhat mysterious character, you’ve come to the right place. This guide aims to provide you with all of the essential information you need to know about Kent, from his favorite gifts to his daily schedule. Let’s get started!

Kent was a soldier before he returned to Stardew Valley in Year 2 of your game, and he still looks the part when he shows up on your doorstep on Spring 1.

His dirty blonde hair is spiked up, similar in style to his son Sam’s, but it’s also neatly trimmed on the sides and generally looks well-kept. His hard-looking face is cleanly shaven and his eyes appear to have very light bags around them, suggesting that Kent is tired, which makes sense given what we learn about his struggle with PTSD.

Kent wears a green jacket with a double chevron on the sleeve, suggesting it’s the coat he wore during his service. He also wears a grey shirt under his jacket.

We can tell that Kent is a friendly guy by the fact that he shows up to introduce himself on the first day he’s back in town. Our interactions with him after this paint a slightly different picture. He feels out of place now that he’s returned home and this loneliness can be visualized as Kent is often found by himself when he’s not at home.

There is a sense of regret that is present in Kent, too, that adds to his seemingly glum outlook. In dialogue, he’ll mention missing out on important moments in his sons’ lives while he was away at war fighting the Gotoro Empire. He wishes he had been able to spend more time with both Sam and Vincent when they were younger.

While Kent’s hobbies aren’t explicitly mentioned in the game, it does seem like he enjoys traveling to the beach with his family when he gets the chance to do it.

Once you reach Ginger Island and are able to fix it up a little, Kent will comment on the tranquility that the ocean provides him and that he’s appreciative to you for giving him a chance to bond with his family there. Ken also mentions having nautical training and, if the weather is nice, will make a point of noting that it’s a good day for fishing.

Jodi is Kent’s wife and the mother of Sam and Vincent. Her best friend is Caroline, who is Pierre’s wife and Abigail’s mother. During Year 1, Jodi will mention her husband and how difficult it is not having him at home. Occasionally, she’ll bring up visiting Yoba’s Shrine in Pierre’s home to pray for Kent’s safe return to Pelican Town.

Despite the difficulty of raising two boys without Kent, Jodi remains bright and positive when you speak to her. As you get to know her better, she reveals that when she was younger she didn’t put much thought into marrying Kent, as it had to be done quickly since he was a soldier. This is a regret of hers and one mistake that she advises the player not to make.

Sam is the older son of Kent and Jodi and he is one of the 12 characters you can marry in Stardew Valley. Sam is the opposite of his father in many ways: where Kent is solemn, quiet, and reserved, Sam is full of energy and has visible hobbies and friends. Sam loves making music with Sebastian and Abigail. He also likes playing video games and skateboarding.

Sam mentions his father before you make attempts to befriend him, saying that he’s a soldier fighting the Gotoro Empire. As for Kent, he expresses some regret at not being there to see Sam grow up into a man.

Vicent is the younger son of Ken and Jodi. Being a younger boy, his days consist mostly of playing at his house or outside and being tutored, along with Jas, by Penny at the museum. Before Kent’s return, Vincent will mention being excited about the prospect of his father coming back, especially if he comes back with toys.

However, Vincent will vocalize noticing a drastic change in Kent’s behavior after coming home from war. He says that his dad seems different and won’t play with him anymore. Because he’s so young though, he only expressed the change in demeanor as Kent acting “weird.”

Kent spends most of his time in or near his home in Pelican Town. On Fridays and Saturdays, he goes to the Stardrop Saloon at 5 PM. His Sunday schedule is slightly different from the other days of the week because he’ll spend a large part of the day in Pierre’s General Store, either at Yoba’s Shrine or in the store itself.

Rainy days don’t bring any real change to Kent’s schedule, as he’ll still spend his time either at home, under a tree north of his home, or the tree close to the bridge to the beach.

If you happen to be pursuing marriage with Alex and reach his 14 Heart Event, Kent’s Sunday schedule will change. In that event, Alex turns the backroom of the Stardrop Saloon into a man-cave of sorts where the men in town can go and watch gridball, a popular sport in the world of Stardew Valley. Kent will spend time in the backroom every Sunday after the event.

Kent is one of two characters that love this dish, the other being Clint. Making Fiddlehead Risotto requires three ingredients: 1 Oil, 1 Fiddlehead Fern, and 1 Garlic. Oil can be easily bought from Pierre’s General Store or made by using an Oil Maker. Garlic can be grown on your farm during Spring starting in Year 2.

Tracking down a Fiddlehead Fern for this dish can prove tricky if you’re not in the right season. When it’s Summer, you can forage for the plant in the Secret Woods – this is probably the safest way to obtain one outside of buying it from the Traveling Cart.

If you’ve progressed far enough in the game to have unlocked Ginger Island, you can find Fiddlehead Ferns in the jungle there during any season. Otherwise, you’ll have to brave the Skull Cavern or the Mines after activating the Shrine of Challenge.

You can learn the recipe to make Fiddlehead Risotto by watching The Queen of Sauce on Fall 28 in Year 2.

This simple meal is an easy gift to give Kent provided its Fall. It requires 3 hazelnuts to make, which can only be foraged for during Fall or grown with Fall Seeds. This is another recipe you can learn by watching The Queen of Sauce on the TV in your home, specifically on Summer 28 in Year 2.

In addition to the Universal Hates and all types of milk, Kent has four gifts that he hates above all else: Algae Soup, Holly, Sashimi, and Tortilla. If you give any of these gifts to him, he’ll remark that he received in a prison camp after being captured by the Gotoro Empire.

It’s a sad line that reveals more of what Kent went through while he was away fighting, but it must have been a very strange prison camp given the nature of the items.

After you reach 3 Hearts with Kent, enter his home when both he and Jodi are there, usually in the morning. Jodi will be popping some popcorn. The sound of the popping will cause Kent to scream and come into the kitchen, saying that the sound reminds him of the war and the friends he lost. Jodi explains she was making it because popcorn used to be a favorite of Kent’s to which he responds, “…Things have changed.”

You have three dialogue options in this event when Jodi asks you to say something to Kent to fix the situation. The best response is to tell Kent not to blame Jodi even though he’s hurting. This results in you becoming better friends with Kent to the tune of +50 Friendship points.

When you reach 3 Hearts with Kent, he’ll also send the recipe for Crispy Bass in the mail. This is a three-ingredient dish that requires a largemouth bass, wheat flour, and oil to make.

Reaching 7 Hearts with Kent will cause him to send you another recipe in the mail, this time for Super Meal. Super Meals are great items to take into any dungeon or hostile area, as the dish briefly raises your maximum energy by 40 points and speed by 1 point, in addition to its ability to restore lots of health and energy. A Super Meal also takes three ingredients to make: 1 bok choy, 1 cranberry, and 1 artichoke.

Question: Where does Kent live?

Answer: Kent lives with his wife, Jodi, and their sons, Sam and Vincent. Their house is the blue one located to the left of Haleigh and Emily’s house.

Question: When does Kent come back to Stardew Valley?

Answer: Kent returns to Stardew Valley on the first day of Year 2. He comes to your farm to introduce himself to you, so there’s no need to track him down to meet him.

Question: Can I marry Kent in Stardew Valley?

Answer: There are 12 characters you can date and marry in Stardew Valley, and Kent is not one of them. He is already married to Jodi and has two children, Sam and Vincent.

Kent is one of the few characters that let us know we’re not living in a perfect utopia as we play Stardew Valley. His Heart Event cutscene shows the lingering after-effects of being in a war and how it’s changed not only Kent’s personality but also his relationships, particularly with Jodi.

I really started to feel for Kent and his family, so it was nice to see his outlook on life change the closer I became with him and especially after opening up Ginger Island.

As far as the minor NPCs of Stardew Valley go, Kent is the one with the most backstory and depth to his character. If you’re planning on starting Stardew Valley for the first time or you’re ready to start your second, third, or fourth farm, take some time during your playthrough to befriend Kent.