Ella Walsh
Ella is SdewHQ's resident virtual farming expert, and whether she is farming, fishing, mining, or decorating her farmhouse, you can rest assured that she is loving every second. Outside of the Stardew universe Ella is a keen gamer and particularly loves titles like Horizon Zero Dawn, The Outer Worlds, and her childhood favorite, Monster's Inc Scare Island. Ella is also a gaming UX researcher, has a keen interest in acccessibity within games and strives to fill up her PS trophy cabinet upon every gaming session.

There are a lot of exciting potential catches in Stardew Valley once you dive into Fishing! It was a skill that I initially avoided as I was getting to grips with the game as it all seemed overwhelming! (Where are the Ocean, river, and lake? Why does time of day matter? what are all these bait types!) But it does get much easier!

A good starting point is to Fish in a few different locations and see what you can get! As you experiment, you most likely (like me) fall in love with this particular aspect of the game, as it is as relaxing as it is rewarding. You might start by getting Fish that are required for the Community Centre or start as part of Quests.

My first interaction with the Squid was actually when I found it when looting (arguably my favorite part of the game) through the bin outside Jodi‘s house; I was completely in shock as at this point, I did not know that you could get Squid at all, and much less so, that you can find them in a bin!

I did what any reasonable person would do, purchased a fish tank from Willy’s Shack and put the Squid in my room (It added to the vibe I was going for). However, there are other more practical uses for Squid (detailed below).

If you are having trouble catching the Squid, or perhaps have forgotten until after Winter, you can attach some Magic Bait, which allows you to catch the Squid at any time, in any season (although it can still only be found in the Ocean).

Once you have the Squid (if not as part of the Quest), you can use this in your Pond to create Squid Ink, or to create dishes, or as gifts to others!

How to Obtain Squid

Unsurprisingly, the Squid has a difficulty rating of 75! The reason for this is that they have a ”Sinking” behavior pattern which means that they often dramatically and hastily drop when you are trying to catch them on your fishing bar.

You can relax these restrictions by using Magic Bait! Using Magic Bait means that you can now catch a Squid at any time of the day and in any season (although you must still fish in the Ocean). Magic Bait can be obtained from the shop in QIs Walnut Room at the price of five QI gems for 20 Magic Bait (as each Bait can only be used once)

You can also purchase the Squid from the Travelling Card, which appears twice a week, on Fridays and Sundays. This can be found south of your Farm and West of Marnie’s house. This can be an expensive choice, however, as the price for one Squid can range anywhere between 240-1000g.

There is also a (rather slim) chance of finding a Squid in the trash cans, which are found outside people’s homes in the Town. Each bin can be searched once per day. Although this is rare, it is not impossible; I have never forgotten the day that I was able to find a Squid in a trash can outside Jodi’s house! Although I would not rely on this method. 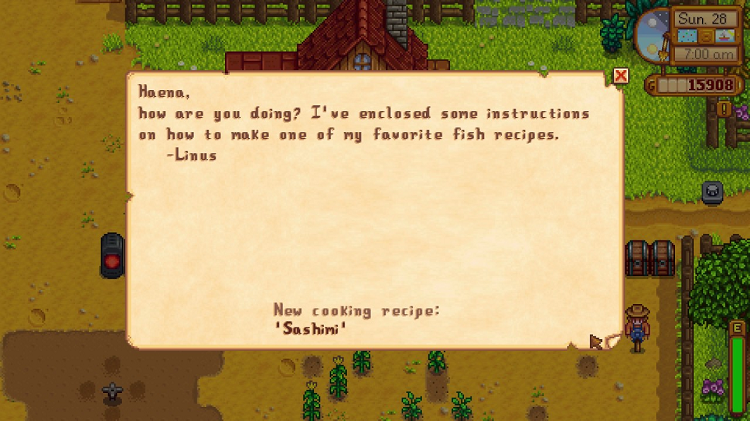 Squid can be used in recipes to create the following dishes;

This requires 1x Squid, 1x Wheat Flour, and 1x Oil. Consuming Fried Calamari will provide you with 80 energy and 36 health. In order to create the Fried Calamari, you first need to get the recipe, which is provided by Jodi once you reach three friendship hearts with her. If you wish to sell this dish, it sells for 150g.

This requires 1x Fish, 1x Seaweed, and 1x Rice. Consuming Maki Roll will provide you with 100 energy and 45 health. In order to receive this recipe, you must first purchase this recipe from the Stardrop Saloon for 300g, or it can be obtained via the TV on your Farm by watching the ”Queen Of Sauce” channel on the 21st of Summer in year one. If you wish to sell this dish, it sells for 220g.

This requires 1x Fish. Consuming Sashimi will provide you with 75 energy and 33 health. In order to create Sashimi, you first need to get the recipe from Linus by reaching three hearts with him. If you wish to sell this dish, it sells for 75g.

This requires 1x Fish. This cannot be consumed and can be used on tilled soil prior to planting crops in order to improve the likelihood of growing quality crops. In order to create this item, you must first reach farming level nine. The Quality Fertilizer can be sold for 10g.

Squid is required to complete;

Once you have obtained a Squid, you can place it within the Pond on your Farm; doing so will mean that rather than producing Roe, you will produce Squid Ink in the Pond. Once you have Squid Ink, you can create the following recipes;

It will also provide an improved fishing buff of four levels for 3.5 minutes which will make it easier to successfully catch a fish. In order to create this, you first need to reach fishing level nine in order to unlock the recipe for the Seafoam Pudding. If you want to sell the Seafoam Pudding, it can be sold for 300g.

Rather surprisingly, the Squid (while a lucrative item and hard to find) is not a welcome gift among most of the villagers! In fact, it is disliked or hated by the majority! Elliot likes the Squid, Demetrius, Leo, Linus, Sebastian, and Willy.

The Squid can be used in the Sewing Machine in order to create the Sailor Shirt; this item is purely a fashion choice and has no impact or effect on the player (other than looking fabulous) 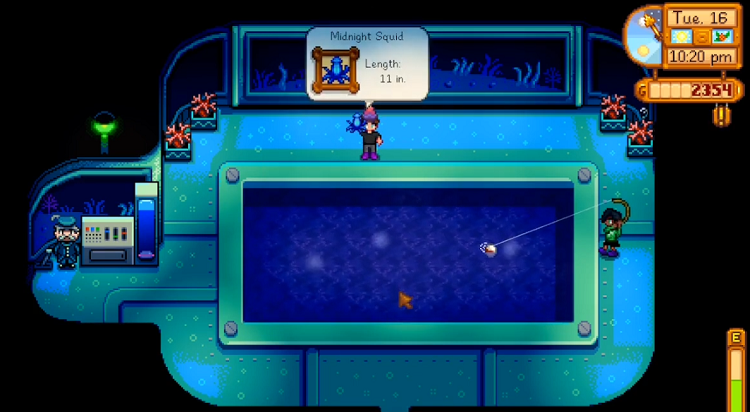 The Midnight Squid is a different species of Squid available in Stardew Valley, this however can only be obtained during the Night Market in Winter 15-17, by visiting the Submarine. Here you have a 21% chance of catching a Midnight Squid, you can also catch a Midnight Squid at the left-most pier on the Beach.

Question: Where is the Best Place to Catch a Squid in Stardew Valley?

Answer: The best place (and indeed only place) to catch a Squid in Stardew Valley is to go to the pier West of Willy’s Shack; Squid can also only be obtained in Winter and also at night! (Just a slight challenge, I know).

Question: How Can I Catch a Squid when it is not Winter?

Answer: If you purchase Magic Bait from QIs Walnut Room and attach this to an Iridium or Fibreglass Rod, you are able to catch the Squid at any time, in any season! Although it must still be caught in the Ocean.

Question: Is a Squid the Same as a Midnight Squid?

Answer: No these are two different species of Squid which are caught in different locations and at different times with different uses.

There are a lot of options when it comes to the Squid, as they are hard to catch; I would recommend holding onto your first Squid in a chest until the ”Catch a Squid” Quest comes around!

After this, the world is your oyster (or Squid), and you can place them in your Pond to get Squid Ink (which in turn can be used to create other items), gifted to others, sold, or used to create a variety of dishes! Or you can do what I did and purchase a Fish Tank from Willy’s Shack and then place the Squid in a tank in your room!