Ella Walsh
Ella is SdewHQ's resident virtual farming expert, and whether she is farming, fishing, mining, or decorating her farmhouse, you can rest assured that she is loving every second. Outside of the Stardew universe Ella is a keen gamer and particularly loves titles like Horizon Zero Dawn, The Outer Worlds, and her childhood favorite, Monster's Inc Scare Island. Ella is also a gaming UX researcher, has a keen interest in acccessibity within games and strives to fill up her PS trophy cabinet upon every gaming session.

Stardew Valley is a simulated RPG where you get to be a farmer in an adorable little town called Pelican Town.  Here in Pelican Town, you can spend your days working on anything you like, from fishing, to foraging, to mining, to cooking, to crafting clothes, to farming and looking after animals; and even spending days at a time decorating your farm and really optimizing its layout.

Not only does Stardew Valley offer all of this, but it also has a rather dense population of a shocking 28 NPCs! Each character has their own likes and dislikes when it comes to food, presents, fish, minerals, and even movies and snacks.

That is something that I have always loved about Stardew Valley; Concerned Ape does not play when it comes to detailed mechanics.

Each character is unique and diverse, with their own backstory and their own character development. Part of the comfort of Stardew Valley, however, is that you don’t have to do anything; you aren’t forced into any particular skill or to interact with any particular characters.

This means that there are some characters that you can overlook or not learn about in a detailed way.

Shane is a great example; at a glance, you would dismiss Shane as being rude and aggressive and never get to know him. You would, however, really miss out if you did rule Shane out, as when you get to know him, you learn how amazing and kind he truly is once you know a bit more about his life.

This detailed development is really part of why the Stardew Valley fan base fiercely defends the game (and its amazing one-man-band of a developer) till death!

The characters in Stardew Valley can also be classed as bachelors or unavailable for romance/marriage. You can marry and even divorce or have children with any character who is single, which is another super fun element of the game.

Not every character can be married or pursued; however, as there are existing couples already living in and contributing to Pelican Town, one such example is Robin and her husband, Demetrius. In this article, I will share everything that there is to know about Demetrius, who, as a fellow scientist, I love!

We know that Demetrius is married to and lives with Robin, his wife, his daughter Maru and his stepson Sebastian. Sebastian’s birth father is not known. However, they function well as an entire family unit, and for all other purposes, Demetrius considers Sebastian, his son.

There is the implication that Sebastian’s biological father is Robin’s first husband as there are books in Robin’s house that appear to be self-help books for your second marriage. While Robin is known for being a carpenter, Demetrius is a keen nature lover and scientist. Demetrius can often be found studying nature in the town or in his lab, which he has as part of his home (how amazing is that!).

While the year of the character’s birth is never revealed, their birth date is! If I had to guess, I would say that Demetrius is a middle-aged man (30-40 years), and his birthday is on the 19th of Summer.

As Demetrius is happily married and domestic arguments and affairs are not encouraged in Stardew Valley, you cannot pursue Demetrius in a romantic way. You can, however, have a nice platonic relationship with Demetrius, which can be rewarding in its own right.

The best way to have a strong and positive relationship with someone in Pelican Town is to regularly interact with them and even give them some thoughtful gifts.

The Best Gifts for Demetrius 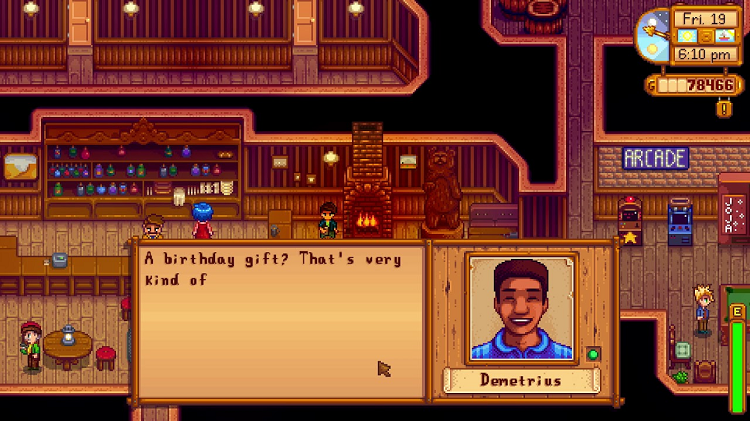 In order for a gift to be thoughtful, you, of course, need to be sure that the person you are presenting the gift to will really appreciate and enjoy the gift.

One of the small joys of Stardew Valley is that everything is incredibly in-depth, even to the smallest details. Each player in Stardew Valley, therefore, has different likes and dislikes about literally everything, fish, minerals, dishes, drinks, films, and even snacks.

So if you really want to give Demetrius the most thoughtful gift that you can, the best thing to do is to give him a gift that he loves.

There are different levels to the gifts in Stardew Valley; they can be loved, liked, neutral, disliked, or even hated. Depending on each character’s personal opinion on the gifts available in the game, this will impact how effective the gift is in improving your relationship with them.

Giving someone a gift that they love will add 80 friendship points to your relationship meter with them, effectively making you closer. Gifts that Demetrius loves include;

Although it may not sound good, giving someone a gift that they are neutral to still adds to your relationship meter by 20 points. Gifts that Demetrius is neutral to include;

You should avoid giving Demetrius any of the following as he dislikes them, and this will damage your relationship with him by 20 points;

You should also avoid the following items which Demetrius hates (reducing your relationship by 40 points if presented to him);

How about Some Netflix and Snacks? 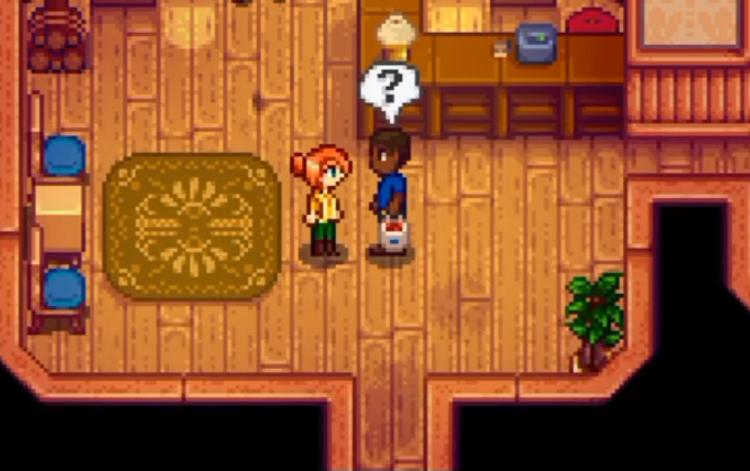 When you progress through the game, there will be a time when you make what I consider to be the most critical decision in Stardew Valley.

Will you support the Community Centre and, by extension, your community? Or will you support the dreaded big corporation which is ruining the livelihood of the town? (Joja Mart) Either way, once you reach this junction, you can get a Movie Theatre!

When you get a Movie Theatre there will be a variety of films and snacks available like any good Cinema would have! In the same way that you can gift someone anything that you find, you can also gift residents with an extra movie ticket to whatever movie you select!

While this is a lovely gesture, you need to be sure that the person you are inviting likes the film in question as if they don’t they will treat the ticket like an unwanted present.

So if you want to take Demetrius on a platonic trip to the movies, here are some good movie and snack options;

Here are some movies and snacks to avoid; 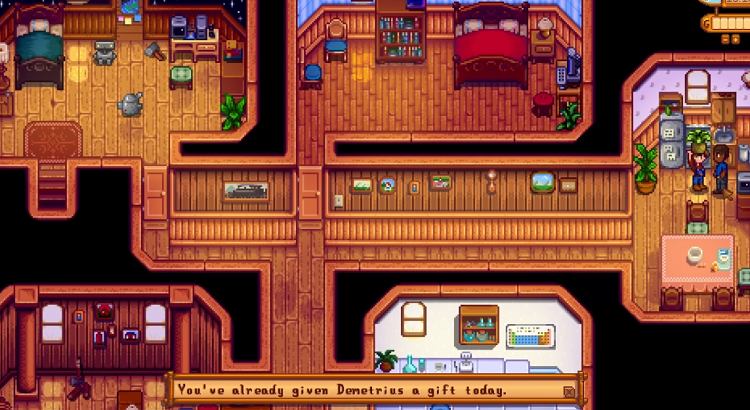 If you want to find Demetrius so that you can speak with him and become better friends with him, you will need to know his schedule as it changes each season and sometimes even with the weather.

As you improve your relationship with Demetrius, you will have some events with him which are milestones in your relationship. As you get friendship points, it moves you closer to each of these events.

There are some quests that occur between you and Demetrius, such as;

Question: Can I Marry Demetrius in Stardew Valley?

Answer: Demetrius is (mostly) happily married to Robin and so is not an eligible character to pursue romantically.

Question: What does Demetrius in Stardew Valley Work as?

Answer: It is not described in any great detail, but what we do know is that Demetrius is some kind of scientist. He has a laboratory in his house and often requests crops from you to ”research” them (although I am not entirely sure what this means). He can also often be found around the cliffs and plants, looking at the wildlife.

Question: What are the Best Gifts for Demetrius?

Answer: If you really want to give Demetrius something you are sure he is going to love, the best gifts are;
• Bean Hotpot – You need to make this yourself using 2x Green Beans
Strawberries
• Ice Cream – This can be purchased from the Ice Cream stand
• Rice Pudding – This can be made using 1x Milk, 1x Sugar, and 1x Rice

Demetrius can appear to be quite a closed-off person who is cold and hard to get to know, but now that you know how to get on his good side and what gifts he likes and dislikes, hopefully, this will bring you one step closer to becoming good friends with him!

Personally, he has never been my favorite character or one that I spend a lot of time becoming close within the many iterations of my farm that I end up making; however, there are certain benefits to being friends with him; if you can overlook how rude he is to Robin that is.

I hope you now know everything you wanted or even needed to know about Demetrius to dive right back into the wonderful world of Stardew Valley and continue exploring Pelican Town and its (mostly) adorable residents.